Today we have a painting of the baiji river dolphin by Sonya Hallett. The baiji was found in the Yangtze River. It was a beautiful creature, and fascinated the ancient Chinese who according to legend believed it to be the spirit of a drowned princess. You may be noticing all the past tense I’m using. That is because the baiji is probably extinct. For years people were calling for the baiji to be protected and for breeding programs to be set up. But those cries were ignored and as the Yangtze grew more congested with traffic and pollution the population of baiji grew smaller and smaller. The most recent population survey in 2009 was unable to find a single live specimen, and barring some miracle this means that the baiji is lost forever.

Sabine has sent to me the fully finished version of her comic from our live event. This lovely comic was done in pen with ink wash. You may remember our earlier post about the shoebill, well Sabine did a lot of research on this bird. She found an old text written by the first western explorers to see the bird, and from their descriptions she became inspired to make this short comic.

Today we have a treat for you. This animation was submitted by Sonya Hallett and features a number of Edge species.

Today I have three gorgeous paintings to share with you, sent in from contributing artist Aimee Lockwood.

Remember, when you donate you not only help raise money for Edge of Existence and encourage more artists to produce great work here, but you also get access to our upcoming anthology of artwork, including giant, high res versions of all three of these great paintings.

The Bactrian Camel. Fewer than 1,000 of these two-humped camels survive today in one of the most hostile regions on earth. 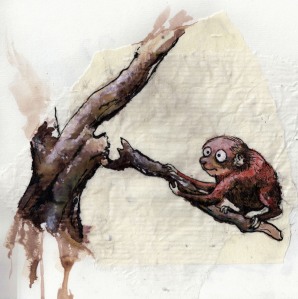 The Red Slender Loris is characterised by its enormous eyes and extremely thin limbs. 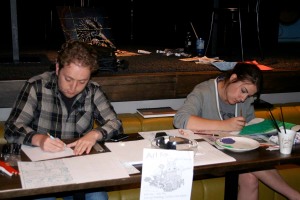 Mike and Allison at work 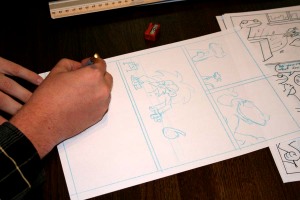 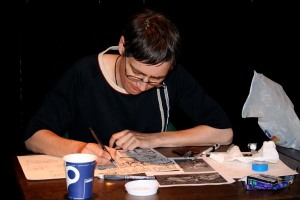 Sabine working on her comic 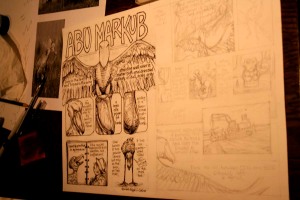 Sabine wasn’t the only artist inspired by the charismatic Shoebill 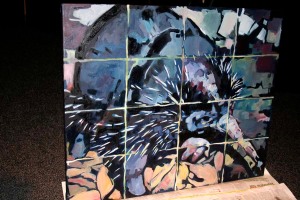 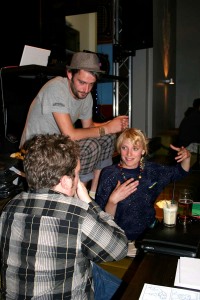 Louise and Paddy set up their VJ show, inspired by many exotic species

Stay tuned for the finished work.

State of the Art For… Union

Tomorrow is our first live event at Mosaic House here in Prague. All day long our artists will be working on fantastic art to raise awareness for hundreds of endangered species, including the small sampling I have blogged about. If you’re not in Prague but would still like to support us, you’re in luck! The first edition of our charity anthology will be available on this website next week. All summer long you can look forward to updates from artists all over the world sending in comics, paintings, animation and more. Then in the fall we will be ready to announce our next big project.

In the mean time, here is an adorable baby Golden Rumped Sengi (Elephant Shrew). Sengis have absolutely amazing brains that I will do a more detailed blog post on in time. Until then, did you know that elephant shrews are actually closer related to elephants than the naturalists who named them originally thought? Its true, they are in fact significantly more elephant than shrew.

Solenodons might resemble over-sized shrews, but their true origins are quite different. These primitive mammals first emerged in the Cretaceous Period. They are one of the oldest living mammal orders in the world. There are only two living species of solenodon today, the Cuban and the Hispaniolan. Both are on the verge of extinction, which would put an end to one of the longest running unique mammal orders in history.

Did you know that the solenodon is one of the few mammals with toxic saliva? Or that it injects this saliva using special grooves in its teeth? I like that we have poisonous prehistoric critters running around our world, and if it were up to me I would keep it that way.

Here is a solenodon I drew earlier today.

I actually hate the coloring job I did on this one, so here’s a coloring book version.

Tapirs are most famous for their fleshy, prehensile nose but that’s not all that’s amazing about them. Tapirs are most closely related to rhinos and horses, but split off to form their own group about 50 million years ago. They were found all over Europe, Asia and North America before largely going extinct. Three surviving species migrated from North America into South America when the two continents collided. Today, only the Asian tapir remains to represent the long gone Old World tapirs.

Asian tapirs are at severe risk to deforestation and the fragmentation of their habitat. The Thailand and Sumatran populations are close to extinction (perhaps only 50-100 left in either location). The population is larger in Malaysia, but everywhere else in Southeast Asia have lost their tapirs forever.

Most tapirs live outside of protected areas, and so the forests are torn down for illegal logging or to make way for palm oil plantations. Tapirs didn’t have to worry much about hunting in the past (Muslims thought they looked too much like pigs and indigenous people believed killing one brought bad luck) but with the continued loss of traditional local game animals, more and more tapirs are winding up poached as a food source.

Conservation required varies wildly depending on the country. Despite their low population in Thailand, nearly all of their range is protected and their future there is positive. In Myanmar and Sumatra things are much less optimistic. Genetic research and a captive breeding program are both underway.

Personally, I’ve always had a fondness for tapirs for two reasons. One, they look like giant shrews in pajamas. I love that. Second, they have a fascinating connection to mythology. Early Japanese explorers in Southeast Asia thought that tapirs resembled the mythological spirit known as the baku. Baku are magical animals that eat nightmares and were said to resemble a cross between an elephant and a lion. I’m not sure why the explorers thought that the tapir would be such a beast, but as a result tapirs became a permanent fixture of Japanese pop culture, appearing in everything from Pokemon to candy packaging.

Today I want to introduce you to one of my favorite amphibians. How can you not love this guy? Come on. He’s like if Jimmy Durante and a purple balloon full of pudding had a kid. The purple frog is a living fossil, the only surviving member of its order. 182 million years ago their ancestors lived in Africa and Antartica when it was all one continent, then they rode India as it separated and drifted into Asia. Older than the Himalayas, outliving the dinosaurs, and yet these amazing, charming creatures are facing extinction at our hands.

Today they are only found in two locations in India, and both locations are rapidly shrinking to make way for coffee, tea, ginger and other plantations. Worse yet, there is no specific conservation underway at the moment.

There is hope though, Edge of Existence is working to increase the ecological study of these creatures, as well as raise awareness among the population. Their range is close to a nature reserve, so extending the borders of the protected land could go a long way. Ecologically safe farming practices exist that could help man coexist with the purple frog (and other species), its just a matter of making people understand why they should.

The numbat, also known as the banded anteater, is a marsupial from Australia that is just barely clinging to survival. Once widespread over southern Australia, it has been wiped out in 99% of its habitat and today is only found in two natural populations.

They are the only marsupial to feed exclusively on termites and can eat as many as 20,000 of the little insects a day with their long, sticky tongues. They are also the only marsupial of their kind left in Australia. Their closest modern relative was the now extinct Tasmanian Tiger.

The biggest threat to the numbat is the deliberate introduction of the red fox by European settlers. Foxes alone wiped out numbats in most of their natural range. Apparently English colonists couldn’t go a week without hunting a fox, and so it was decided to release a batch of the carnivores into an alien ecosystem. Way to go dumb people who died several hundred years ago.

Thankfully, there has been success in breeding programs and today there are six populations of reintroduced numbats in Western Australia. Part of this is due to the success in raising awareness of numbats and making them a mascot for conservation in Western Australia. The charming numbat has its natural adorability to help it out. They seem to take all the best attributes of kangaroos, squirrels and foxes and roll them into one stripey fluffball. However, it is important to remember that even animals not blessed with an anthrocentric ideal of cute need protection.